Somehow, hammers are the favorites of boys. At least in my family. My sons like it, too. And they don’t understand, why I don’t like it, that they like it (I like it, but just in my own hands…).  Something always happens, of course accidentally, so they can’t play with their toy hammer without consequences. For example, the couch table. The little one likes to play in the kitchen with bowls, spoons, etc, with all kitchen things. One day he found the meat tenderiser, he was so happy. He ran to the couch table and bumm, bumm. And I really often hear from him: I have an idea. Where is my hammer?

Last time, as I heard this sentence, I searched some screws and a wooden panel.  For half an hour it was just: bumm, bumm, bumm. It is a really good game :-). 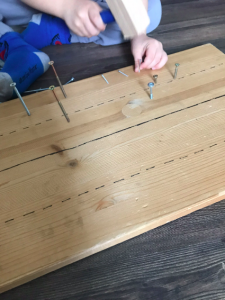 A little story for the end. My brother used to have his own hammer, too. Of course a real one. That was a mistake from my father. He is an electrician and has many tools, a lot. Back then he had some really expensive electronic meters that were supposed to be mounted somewhere and he kept them in his garage until then. These meters had little glass windows on the front. My brother was outside with our mother and he had his hammer with him. The garage was open and my brother went inside. My mother only realized after two or three minutes, what he was doing. Tick, tack, bumm, bumm… My father wasn’t happy, to say the least… My mother just said: If he doesn’t get a divorce now, then he never will. They are still married :-).